Way back in a previous century I had the only job I had ever lobbied for and loved. I was hired as secretary in the P.R. Department at the Field Museum of Natural History in Chicago. We were a three-woman department: my boss, Corky, her assistant, and me. I roamed the Museum freely whenever possible, and was often sent to the basement with galleys for the printshop that lived behind a rear wall down there.

The mummies were down there as well (they have now been relocated to fancy new tombish quarters), and so was this guy. Bushman. The great ape who had lived long at the Lincoln Park Zoo. I cannot say I ever saw him in life. We lived downstate when I was growing up, and he had long been relocated to the Field Museum by the time I got there. But I felt an affinity nevertheless.

Field Notes, an in-house Museum newsletter, was a brainchild of mine and I published it for the too few years I remained at the Field. Along with little updates from the various departments (you know that behind all those little windows at the top of the Field that you see when driving down Lake Shore Drive are the offices of world renowned adventurers in the various -ologies, don't you?), I included a little column of my own that I called, "Conversations with Bushman," in which I mused about the Museum and all my favorite denizens, like the lions of Tsavo and Carl Akeley, who stuffed the African elephant forever charging down the great hall.

The Field Museum of Natural History was a magical place, full of famous names and artifacts, but this guy was always the King. 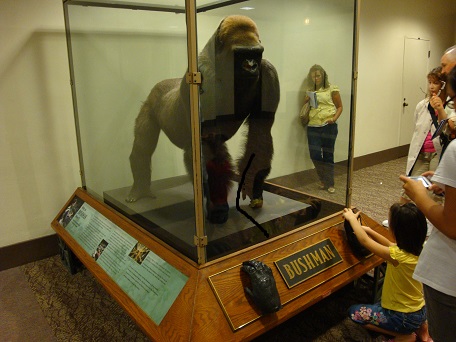