I made the statement yesterday, in response to a Facebook thread with a (fellow) atheist, that if I lived in Italy, I'd convert. I'm in it for the art, I said. This picture is one of the reasons why. 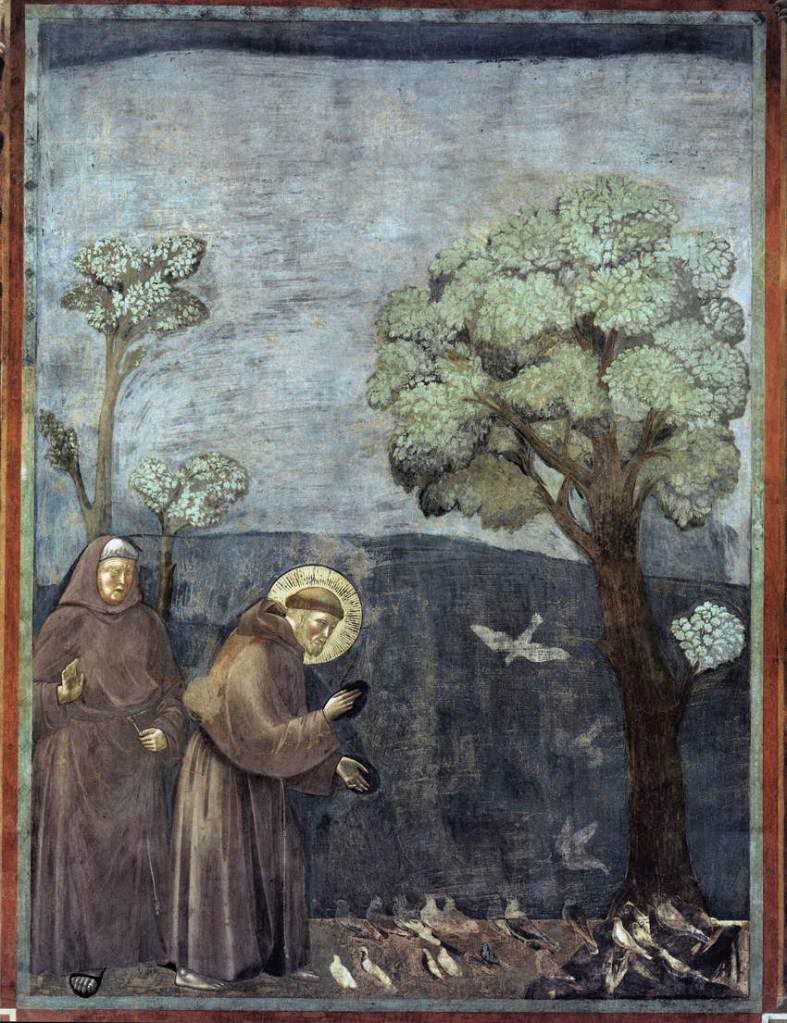 I didn't take this picture. St. Francis Preaching To The Birds. It is not allowed to take photographs in the Basilica of San Francesco d'Assisi. I copped it from the web. In the spring of 2008, I was on my way from Rome to Florence, and stopped for a couple of hours at Assisi to visit with the Giottos. Specifically, the 28 frescoes attributed to the young Giotto of the life of St. Francis. I had always been fond of Giotto. His paintings were the ones I could always pick out on art history exams. They had a wonderful simplicity, like illustrations for a children's book.

So I stashed my luggage with the concessionaire at the train station and caught the bus to the Basilica on the hill. The frescoes line both sides of a long gallery. School children thronged the chapels to either side, but for a few precious moments, I shared the gallery with one other person. A man, who moved just a frescoe ahead of me. We stood for a little while in front of each one, all 28 of them, and after the first couple we began a silent communication. OK. I'm ready. Let's move on. It's likely we would never have understood each other in conversation, but we had a conversation of sorts in front of those frescoes.

So for a moment I was one of the illiterate peasants who would once have come here on festival days. Neither of us would have understood the words of the Latin Mass which was sung. And maybe the singing and the Latin and the grandeur of the high altar would have made us feel small, perhaps awed, but insignificant in the greater scheme of things.

And that's when I saw the light. I understood a little more of the people who came here, of the people who believed, and why. I said I was in it for the art. But I'm actually in it for the story. Do I believe in St. Francis or his God? No. But I do believe in the story. Coyote and Raven. Krishna and the Milkmaids. St. Francis preaching to the birds. The story, whatever it is, connects us - to each other, to the earth, to the distant stars. The story is what it's all about.