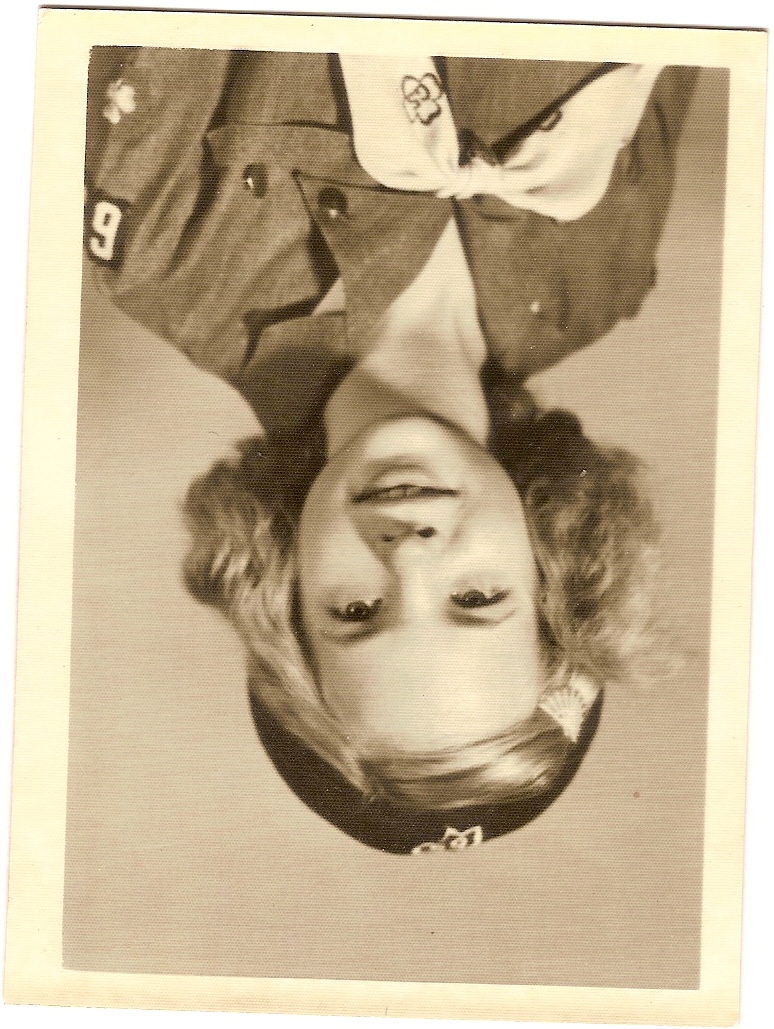 Yes, I was a Girl Scout for some of the best years of my youth. If there was a badge for photo scanning, I would have had to cheat on it. Still can't get anything quite straight. I did get a few badges. but I can't remember any of them. Except knots. I got knots. Short story below. So I can't tell you any tales about what I learned in Girl Scouts, but I think I learned quite a bit. That's because it was in Troop 58 that I made the best friends I would ever have until much, much later: Lydia, Marlene, Mary, Judy, Marty.

Mary's dad and Mary, Lydia, Judy and me, with Lydia's dad playing with the fire.

Marty was our bad girl, and very often I was her accomplice. She wore makeup before any of us, and was boy-crazy. Well, so was I but I was a little shyer about it. Besides, I had fallen in love early with a tall boy with black hair who never noticed me until it was too late. But I ran around with Marty when the chance presented itself and more or less picked up her reputation, of which I was a little too proud. Sometimes we smoked cigarettes and swore.

Judy was the tallest and most accomplished of any of us. She could put a 4-person tent together almost single handed, set up the army cots and get a fire going while Marty and I were scouting out the horse stables. Because that was the other thing Marty and I did. We hung out at the stables of any state park our leaders had chosen for our camping trip each summer. Mary went with us, but she went for the horses. Marty and I always fell in love with the horse boys. Mary also helped me cheat on my knots badge (see above). I still can't remember how to tie anything more complicated than a shoelace.

Marlene. I don't remember what precise role Marlene played, except that she wanted more than anything to be a nurse. I bet she got all those badges, too, but I can't claim to have kept track. I remember she laughed a lot. Year later, when Marlene met Lydia and I in Maine for a weekend, she was still laughing. And yes, she had become a nurse. A surgical nurse. A few of us lived our dreams.

Lydia and I - I can't remember when we met. Maybe it was in Girl Scouts. My family had just moved from the east side of town to the west - maybe it was at Roosevelt Junior High. Maybe she invited me to join the local Troop. Maybe not. All I know is that from early on Lydia and I did almost everything together. We watched the very first episodes of Disneyland. I can still remember lying on her living room floor, ooing and ahhing at the fireworks rising over Sleeping Beauty's Castle. We fell in love with whatsisname, the cute Musketeer, and we wanted to be Annette. We were in the first freshman class at the new Douglas MacArthur (Go, Generals!) High School, and rode the same bus. Sometimes we skipped the bus and cut through Fairview Park, talking about how we'd tell our kids we had to walk miles through the snowdrifts to get to school. And of course we were Girl Scouts.

We weren't the cool kids, my friends and I. Not many of the cool kids were in Girl Scouts. But it didn't matter to us. We were, some of us, a little nerdy, but we didn't know that word and it would be a few decades before nerds became the cool kids anyway. But most of us got good grades, and if we weren't the beautiful people, we were friends. We stuck together. Today we would be the stars of Stranger Things. Or so I like to think.

I also like to think that the high point of my career in Girl Scouts was when a certain number of my friends' mothers asked my Scout Leader that I be kicked out of the Troop. Something to do with sex or atheism, I seem to recall. Or at least I suppose that's what it was. I was deemed a bad influence. Whatever. It was a short lived kerfuffle. I think it likely had more to do with the atheism than anything else. I can see a few of my troopmates telling their parents that Barbara Bates says she is an atheist. I can't see them telling them that I also knew all about sex.

I knew all about sex because I had discovered The Kinsey Reports in the Public Library and had been secretly perusing them in the stacks. So many new words, so little understanding of any of them. And yet, I passed on all that I could learn about this great thing that we would all have to confront at some point if we ever wanted to have children. Of which, being the oldest of six, I could not imagine ever wanting, not to mention ... well, unmentionables.

At any rate, my parents went to bat for me and my great scout leader, Mrs. Cavalito, stood up for me and I remained a Girl Scout. One with very few earned badges, true. Not to mention the lowest number of boxes of Girl Scout Cookies ever sold. Remember - in my non-scouting life I was living in trees with books.

But the Troop lives on in fond memory, as does so many of those of who were there with me: Nancy, Irene, Sandy, Jan ... Dammit! Why can't I remember them all? They all deserve to be remembered. Because the Troop lives on for realz, too. I saw many of them - not my closest buddies, I'm sorry to say. Lydia couldn't come, we can't find Marlene anymore, I've been looking for Mary for years, and Judy refuses (my guess) to leave Alaska - but many others gathered for breakfast one morning at a class reunion about ten years ago. Sandy had moved back to Canada (I remember her for saying oot), and had become a judge. She had the nerve to show up in her uniform with her sash simply sagging with well-earned badges. I might have tried to explain what a Deadhead was, but I don't remember any real interest. Irene organizes the reunions and Nancy keeps us all informed. Jan had married a guy named Clarence and to my jaundiced eye might have appeared to have led a dull life, except that I couldn't help but feel something warm and loving when I was with the two of them. They had found something I never had. Whatever it was, it wasn't in the treetops or in books. I didn't envy them, but I was glad that I had grown up enough to recognize it.

The Girl Scout Law reads:
I will do my best to be
honest and fair,
friendly and helpful,
considerate and caring,
courageous and strong,
and responsible for what I say and do,
and to respect myself and others,
respect authority,
use resources wisely,
make the world a better place,
and be a sister to every Girl Scout.

The women who gathered for breakfast that day are all women who have lived out the Girl Scout law in their own special ways. I might even include myself in that, barring the "respecting authority" thing. And they have all become a part of me in ways I might never really recognize. I can only be grateful.